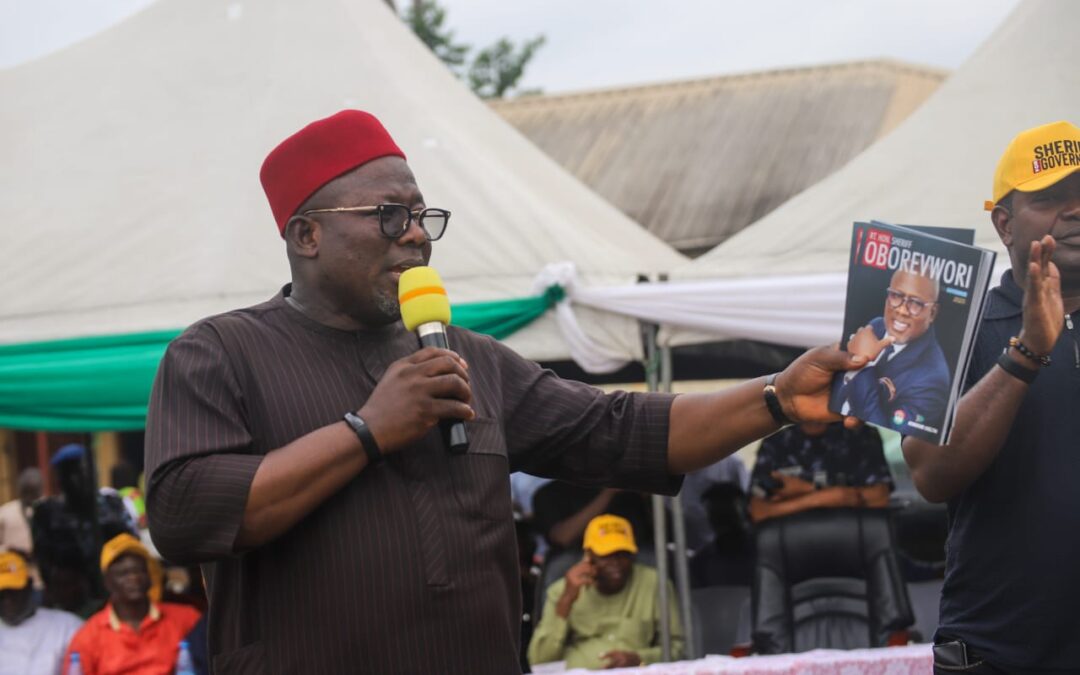 Speaker, Delta State House of Assembly, Rt Hon Sheriff Oborevwori has said that his desire in 2023 is to step into the big shoes of Governor Ifeanyi Okowa to consolidate on his enviable achievements.

Speaking on Friday, at Ushie in Ndokwa East Local Government Area in continuation of his consultation visits, Rt Hon Oborevwori, implored party leaders, critical stakeholders and delegates of the Peoples Democratic Party (PDP) in the area to do the needful for him at the party primaries on May 21st, 2022 in order to sustain the good works of the Governor.

He said; “I want to thank all of you for this massive mobilisation today. It is like a rally. I am your son, and I have served this state in different capacities. I want to be uplifted after serving as a Speaker to take over from Governor Okowa who has done very well in our dear state. He has spread development to all parts of the state and it is only proper that someone like me that has learnt a lot from him to take over from him in 2023”.

The Speaker who is the National Deputy Chairman of the Conference of Speakers of State Legislatures of Nigeria added; “I want to step into the big shoes of Governor Okowa for continuity and I promise to serve Deltans diligently as our Governor is doing at the moment and I am here today to present myself to you and to appeal to you to massively vote for me at the primaries of our great party”.

At Kwale, Headquarters of Ndokwa West Local Government Area of Delta, Rt Hon Oborevwori, spoke in the same vein and lauded the people for their support.

The Chairman of PDP in the area, Lucky Okuji, assured the Speaker that they will not disappoint him, describing him as a man of integrity.

The Speaker who was also in Obiaruku, Headquarters of Ukwuani Local Government Area of the state, reeled out what he intended to do for Deltans if elected Governor in 2023.

Rt Hon Oborevwori who defiled the heavy downpours in the area, appealed to the party leaders, critical stakeholders and delegates to vote for him at the primaries slated for May 21st, 2022.

The Speaker was accompanied by the cream of politicians in the State.