2023 : I Am Interested In The Governorship Position Of Delta State, Oborevwori Tells Traditional Rulers Of Urhobo Nation 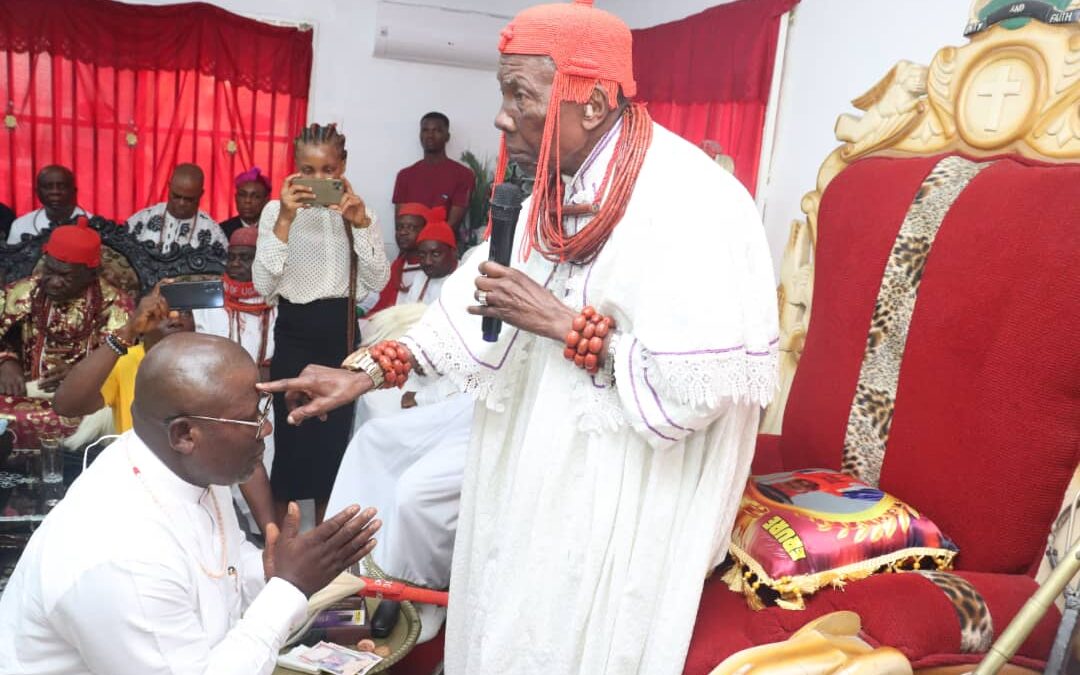 Speaker of the Delta State House of Assembly, Rt Hon Sheriff Oborevwori, on Monday, April 4th, 2020, informed traditional rulers of Urhobo nation of his intention to contest for the Governorship position in 2023 and asked for their royal blessings.

Rt Hon Oborevwori who is also the National Deputy Chairman of the Conference of Speakers of State Legislatures of Nigeria, on a visit to monarchs in Urhobo Nation at the Palace of the Owhorode of Olomu Kingdom, His Royal Majesty Ovie Richard Layeguen Ogbon, Ogoni-Oghoro 1, said that; “My highly respected royal fathers of Urhobo Nation extraction, I am here today to inform you that I am interested in the Governorship position of our dear state in 2023 and to seek your royal blessings. I want to build on what our Governor, Senator Dr Ifeanyi Okowa has done in the State”.

The Speaker who was accompanied to the palace of the Owhorode of Olomu Kingdom by the who is who in Delta Politics including serving members of the State House of Assembly and Commissioners commended the Urhobo Traditional Rulers for their advice and support over the years, especially for sustaining peace in their various domains that has led to the success of the administration of Governor Okowa.

According to him, in 2017 when he emerged Speaker of the Delta State House of Assembly, the traditional rulers prayed for him adding that their prayers have worked for him.

He also said that, it is the efficacy of the prayers of the traditional rulers that encouraged him to seek their prayers to succeed in his quest to succeed Governor Okowa in 2023, saying that ;”Today, I have come to be refilled with your royal blessings and prayers”.

He said as a grassroot politician he was fully prepared to pilot the affairs of the state if elected the Governor in 2023 noting that his achievements as the youngest Chairman of Osubi Community some years ago are there for all to see just as he added that as a Pan Deltan, his support base cuts across the 25 local government areas and promised to accord the traditional rulers institution its due respect.

“Our traditional rulers have helped in maintaining peace and order in the State hence we are enjoying peace throughout the State. In 2023, if I am elected as the Governor, we will sustain the prevailing peace in the State and the current recognition being enjoyed by our traditional rulers will also be sustained. I am not here for a campaign, but to receive royal blessings from our monarchs”, the foremost governorship aspirant stated.

Responding on behalf of the Urhobo Traditional Rulers Forum, the Ovie of Agbon Kingdom, Ogurimerime-Ukori 1, said that Rt Hon Oborevwori is a prominent son of Urhoboland and that they are proud to identify with him.

He noted that as a grassroot politician that grew up in Urhobo land, the traditional rulers have no doubt, he will do well if he is elected as Governor in 2023.

Chairman of the Urhobo Traditional Rulers Forum, the Owhorode of Olomu Kingdom, prayed for the actualisation of the Governorship ambition of the Speaker.

One after the other, the seventeen Urhobo traditional rulers present prayed for the success of the Governorship ambition of the Speaker.