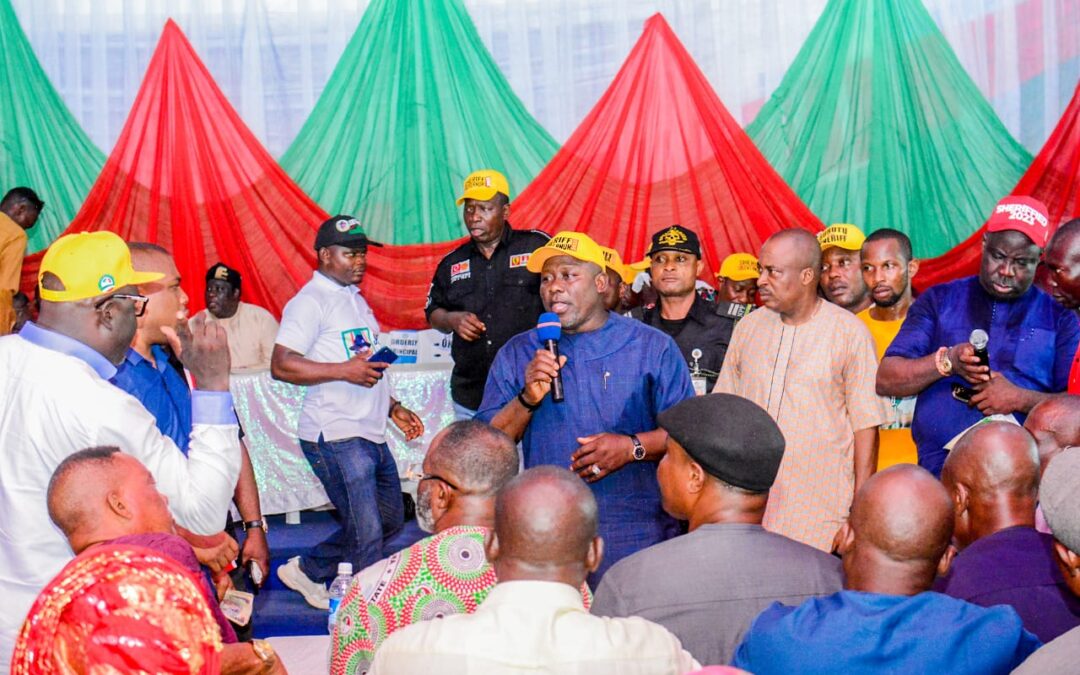 The Speaker of the Delta State House of Assembly, Rt Hon Sheriff Oborevwori, on Tuesday, April 12th, 2022, assured delegates that if elected Governor next year, collectively he will rule the state with Deltans.

Rt Hon Oborevwori, a foremost Governorship aspirant in the State, said in Warri, Headquarters of Warri South Local Government Area, that he will operate an inclusive government with inputs from all and sundry as currently being done by the state Governor, Senator Dr Ifeanyi Okowa and described himself as a proper Warri person.

“This is my place too. I am a proper Warri person. I want to sincerely thank all of you here today for this massive mobilisation for my consultation visit . This is not a rented crowd. Our people in Warri are happy that I am one of them. I have come here today to tell you that I want to be the next governor of Delta State in 2023 and if I am elected, I will place our state above other states in all aspects. We all know that the state governor is doing very well and it is only proper that someone that has worked closely with him over the years should take over from him to continue his great work”, he said.

The Speaker who is also the National Deputy Chairman of the Conference of Speakers of state legislatures of Nigeria added that; “My prayer is to be the state governor in 2023 and it is you that can make it happen . I am succeeding in the Delta State House of Assembly today because I am a proper Warri man, the Warri style that I took to the House of Assembly is helping me a lot and so we will collectively run Delta State together if elected Governor. I believe in the oil city of Warri. You people know my capacity and so give me your votes at the primaries on May 21st, 2022”.

Addressing Burutu PDP leaders, critical stakeholders and delegates, the Speaker said that he was impressed with their massive turnout and implored them to do him the favour by voting for him at the primaries.

“Burutu is among the local government areas that adopted me two weeks ago in Warri and so sustain this impressive tempo at the primaries. I have a vision to keep our State ahead of other states if I am elected Governor by the grace of God next year”, the governorship aspirant stated.

In Oleh, Headquarters of Isoko South Local Government Area of the state, the Speaker informed the people that; “I am here today to consult you on my intention to contest for the Governorship position in 2023 and I must say that this is a consultation turned into political rally and I am overwhelmed with what I have seen here today in Oleh and so give me your votes at our party primaries so that I can continue with the achievements of our Governor, Senator Dr Ifeanyi Okowa who has done extremely well”.