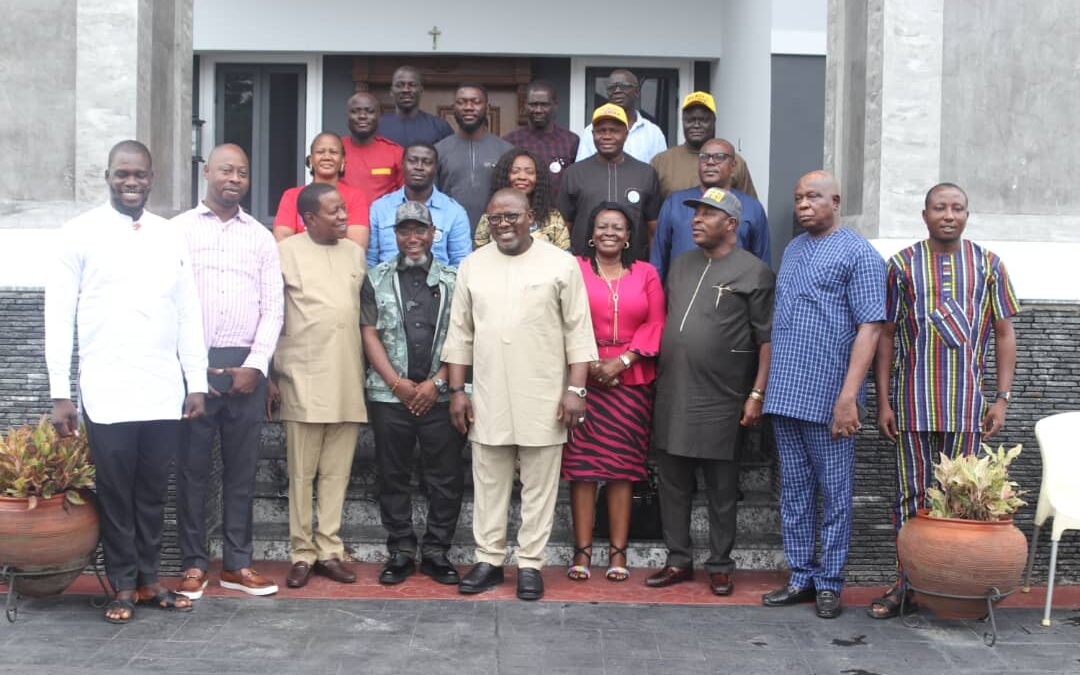 Civil Society leaders under the aegis of Civil Society Network for Citizens Engagement, Credible Elections and Good Governance (CSNCE2GG) in Delta State have said that if Deltans do not take the opportunity of electing the Speaker of the Delta State House of Assembly, Rt Hon Sheriff Oborevwori as the next governor of the state, they would have done great deservice to themselves.

Speaking at an engagement with the Speaker in his Osubi residence, the Civil Society leaders led by Activist Rex Emojite Anighoro, described the foremost Governorship aspirant in the State Rt. Hon. Sheriff Oborevwori as a defender of the people as well as Civil Society friendly aspirant, saying he is the right man for the job.

Activist Rex Anighoro, Senior Special Assistant to Governor Okowa, while speaking said that; “We do not have people like Sheriff Oborevwori all the time in a life time, people like him are rare, they come once in a life time, maybe once in thousands year; if Deltans do not take this opportunity just like Ronaldo and Messi coming in the likes of the football fans, we may have done great deservice to ourselves”.

“We believe our time to change the narrative of Delta State has come and I personally believe you have the competency, the capabilities to turn Delta State around”, he added.

He also said that; “I want to say that you are a child of destiny. As a first timer in the House of Assembly, God elevated you to become the Speaker and you were reelected as a Speaker in the Seventh Assembly and seeing the caliber of Honourable Members sitting with you here today has motivated me to throw in my support and not just my support, but to mobilize civil societies and others to your course because governance is enjoyable when you have people you can assess easily . All we need to do is to lobby for the citizens and I am thanking your team for standing by you. I want to say Sir, we will support you because we believe in you”.

“We want to plead that you allow the Civil Societies to play significant role in your campaign. I am imploring you to allow civil societies to have their inputs into it when you have won the primaries, after you have emerged as the flagbearer of the PDP, we should be allowed to step into the campaign properly. I say thank you Honourable Speaker for listening to us and for giving us this opportunity to engage with you and I pray again to give us greater opportunity to be part of this process”, he stated.

On her part, Amb. Augusta Impact Keneboh of Afro Centre for Development, Peace and Justice said that; “Your manifesto says MORE which stands for meaningful development, opportunity for all, realistic reforms and enhancing peace and security. This can only be achievable when citizens engagement is given top priority, creating space for Civil Society contributions, independent monitoring and reporting of the implementation as you work towards becoming the next Governor of Delta State”.

“We are advocates for change with capacity to partner and support good governance. There are roles we can play to ensure that the electioneering procedures are carried out successfully. Therefore today, having gone through your manifesto and given opportunity to engage with you, we wish you well as the citizens of Delta State and the global community are watching to see free and credible election in Delta State”, she add.

According to her; “Nigeria is a country that the world have so much interest on. what is happening in Nigeria, what is happening in Africa are of great interest to the world. Once it comes to Africa, it comes to Nigeria and once it comes to Nigeria, Delta is a spotlight State, that means your manifesto have gone round the world. At this point, what the CSOs look forward to is more open Government Partnership and guided by the principle of the Sustainable Development Goals. We will keep playing our roles in Sensitization, advocacy and monitoring of the electioneering processes”.

Dr Martins Kedienhon of Safe Aid Foundation, while speaking noted that;” I have read through the manifesto and the contents are well driven and I believe it will bring lasting development to Delta State. I want to commend our Governor hopeful that those words in the manifesto are very good and of the standard of the civil societies worldwide. There are some attributes which I want to highlight which are of the civil societies. In the manifesto, I noticed you are non tribal bias that is, you can work with every tribe in the state which will bring good development to the state and you are people’s friendly and when you are people’s friendly, alot of issues will be resolved”.

“Civil Societies will keep on engaging citizens on what they are expected to do and what the government ought to bring to them and how they can develop themselves. We encourage this government which I believe that when we get to Government House that such programmes should be encouraged in different localities. Think of how to build them and their capacity to understand government and also believe in the inclusion of people living with disabilities in your project and make sure that they are part of the government”, he said.

Responding, the Speaker of the Delta State House of Assembly and National Deputy Chairman of the Conference of Speakers of State Legislatures of Nigeria Rt Hon Sheriff Oborevwori said that; “First I want to appreciate you for this visit today. It is a great show of love. I want to say that going through my manifesto, it is not about the beauty of the manifesto, but the content in the manifesto. The MORE agenda is all inclusive”.

“I have said that I will listen MORE, do MORE and achieve MORE. It is not about me but to keep Delta State ahead of other states in all aspects of social and economic wellbeing and when you see my mission is to operate an open and responsive government that meets the need and aspiration of our people through infrastructural development, growth in human capital and improve social harmony”, he added.

According to him also; “I am a unifier, I am a Pan-Deltan. I have a relationship at the lower level and the higher level; I am in the middle mediating because I have lived with these people, I understand them because their pains are my pains”

“I want to give service to the state and to serve our people. As you can see, everywhere is Sheriffied! They are not Sheriffied because Sheriff wants to become Governor, but because they know my capacity, they know the excessive local content that I have. My campaign is issue-based and that is the way it should be. I have presented myself to serve Delta State, I want to give service I must thank you for coming and I will not disappoint Deltans. I will live to their expectations and pray for God’s power, sound health and energy to see how we can manage our dear State collectively”, he stated.

Amongst the delegation of Civil Society leaders in attendance were Amb. Augusta Impact Keneboh of the Afro Centre for Development, Peace and Justice, Dr. Martins Kediehon of the Safe Aid Foundation, Comrade Williams Welemu of the Shedrack Agediga Foundation, Amb. Eris Jewo of the Working Fingers International, Activist Ambrose Egbe of the Defenders of the Common Cause, Comrade Daniel Evwerhanmre of the Advocates of the Global Goals and Citizens Greater Good Initiative, Activist John Izobo of the Delta State Civil Society Volunteers, Amb. Tonbra Kasikoro Kiloprite of Women Initiative for Values Empowerment and Sustainability, Activist George Oghenekevwe of the Alliance for Social Justice and Human Rights and Efetobore German of Human Rights and Good Governance Initiative.