FROM FAILURE TO SUCCESS 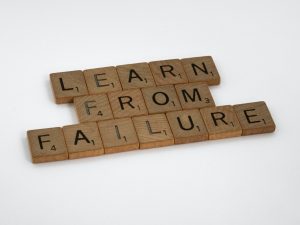 Photo by Brett Jordan on Unsplash

FAILURE IS SUCCESS IN THE MAKING

“Success is not final, failure is not fatal: it is the courage to continue that counts” –Winston Churchill

Failure is dreaded by most people, and for good reason; it stinks, brings shame and disgrace, but one thing you must know is that failure is not all that bad. In my experience and that of many history makers and world changers, it could be a good thing to fail.

To succeed the first time is good, however to fail first and succeed later is two – too – GOOD. The advantages and lessons you learn from failure can’t be learnt from books or lectures, especially the emotional twists and turns within.

This is not to advocate that you should deliberately fail or pray to fail or wish to fail – far from it because in that case it wouldn’t be failure BUT FOLLY. Failure will definitely come at some point in life; you won’t need to make an effort in order for it to happen. It will just occur. It’s a signpost on some roads you will take as you travel the pathway to success. The essence of this message today is that you face failure with a different mindset.

Don’t Beat Yourself More Than Necessary.

Failure is a stopper, a limiter and a rejecter. You are refused entry to a new level or dimension. People fail at school, work, relationships and games. We set goals and aren’t able to reach them; our deadlines are passed and we mess up the interview.

It’s good to feel sad, but not downcast; irritated but not hopeless. It is worthy to note here however that there are those who knowing the end of the matter don’t even feel sad or irritated at all. They just move on to the next step.

In any case until you get to that level of maturity, you can take it with the usual negative reaction, but not for long. Move on. Carry the lessons with you and not the shame. It’s not just that you are not the only one who failed, has failed or will fail, but that IT IS NOT THE END OF YOUR STORY. It is in your hand to make sure it is not the end of the story.

Accepting that failure is an advantage doesn’t mean you should embrace it and rub it into your skin as if it is your destination. Nobody was born to fail and no one should sit and party in the house of failure as if they own a bragging right about who has failed more.

Address the cause of failure seriously and calculatedly. Always calculate. Think and go through the whole exercise again. Roll advises and lessons in your mind. Think about how you could have done it differently, AND THEN GO BACK TO WORK.

A Chinese proverb goes thus: Failure is not falling down but refusing to get up.

GET UP EACH DAY AND JOURNEY TO THE TOP!